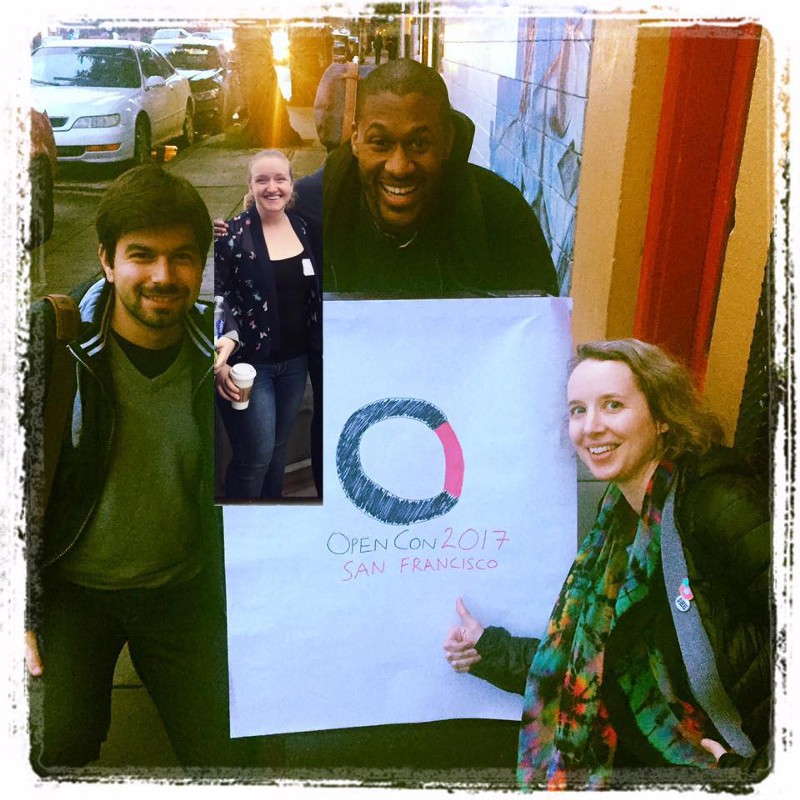 Bruno, Danielle, Kirstie and Teon, fellows of Mozilla Science Lab, are now over halfway through their Mozilla Science Fellowship so we all came together for a workweek in San Francisco in February to share skills, give and get feedback on our projects, and inspire each other with new ideas. By pure coincidence it also gave us the chance to attend OpenCon SF.

On the face of it OpenCon is a conference for early career academic professionals who are passionate about Open Access, Open Education, and Open Data. It runs for three days each year and in November 2016, around 250 delegates came together in Washington DC. You can read more about the main conference in science fellow Danielle’s blog post.

But OpenCon is more than the conference: it is a community who want to catalyze action around the world. Members are passionate about creating a more open system for sharing the world’s information — from scholarly and scientific research, ensuring that everyone has access to educational materials, and harnessing the power of the internet for efficient use (and re-use) of research data.

The OpenCon satellite events held around the world are a key part of building momentum for this change. They build up and maintain the grassroots movements that will truly change the world. There were more than 14,000 applications for OpenCon in 2016. The satellite events allow local communities to benefit from the activities and expertise of the wider OpenCon community and to share their projects, stories and passion with each other.

The night kicked off with an introduction and welcome from the event organizer Gary McDowell. 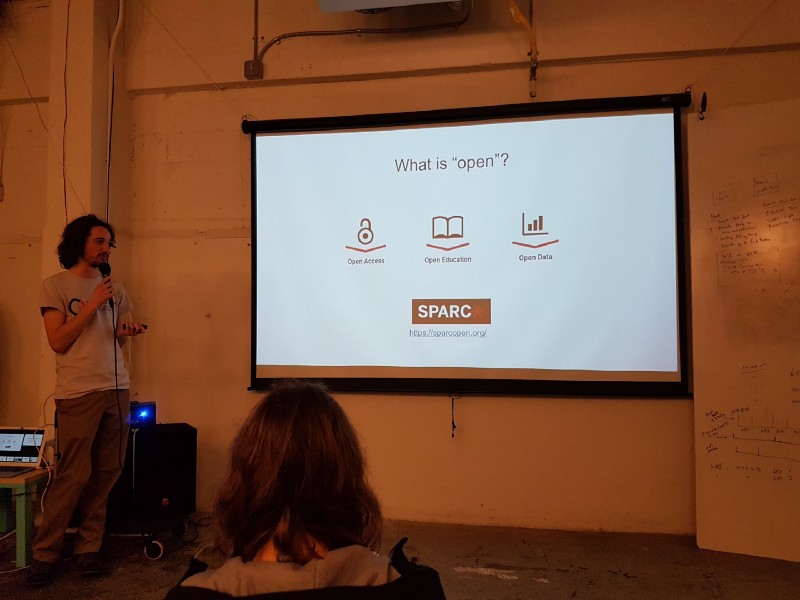 Our first invited speaker was the inspirational Stephanie Santoso, former White House Senior Advisor for Making. Santoso spoke on building a Nation of Makers, which showcased the creativity and ingenuity of innovators, both young and young at heart. Making and Science, affectionately referred to as Maker Science, has reinvigorated the way science and technology are being introduced in the classroom, labs, hackerspaces and living rooms. Santoso highlighted citizen science projects, like the Foldscope, that promote the philosophy of open science: information sharing and collaboration. These projects invoke discovery with the power of putting simple tools in the hands of the public. 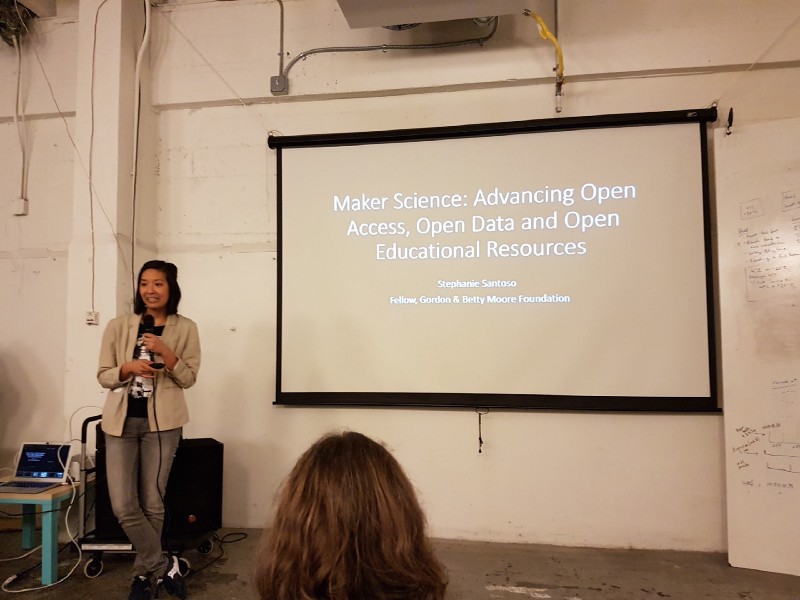 The dynamic and passionate Mónica Feliú-Mójer then showed us the most exceptional video of an octopus so brilliantly camouflaged that we needed to watch the clip in slow motion to even spot it!

The point was not simply to see ridiculously cool cephalopods in action, but to demonstrate the power of scientific communication. This video shares scientific knowledge with a broad audience without stripping it of excitement. By talking directly with the public via YouTube, scientists are able to convey the rich experience of discovery. The videos on iBiology disseminate research findings in an much more engaging and accessible way than traditional academic journal articles. 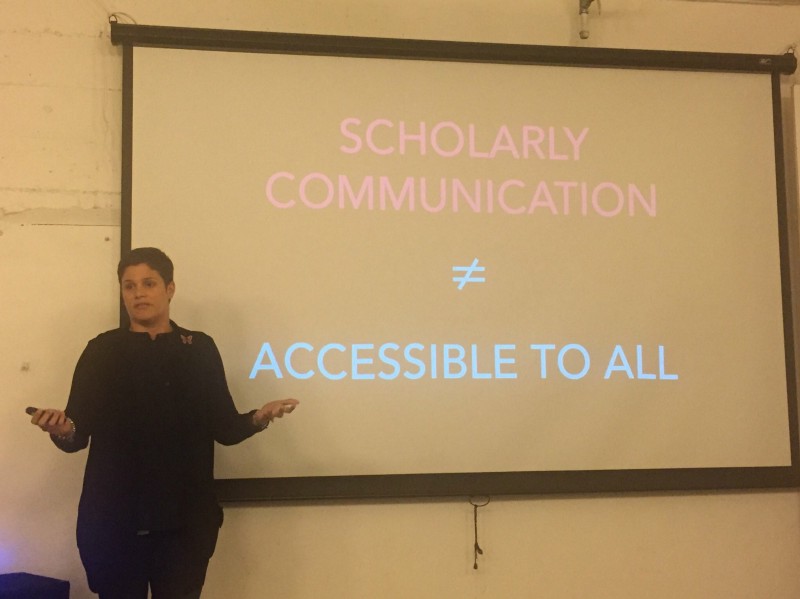 In true OpenCon community style we had some food and drinks, and then the floor was open for anyone in the room who wanted to share their work: 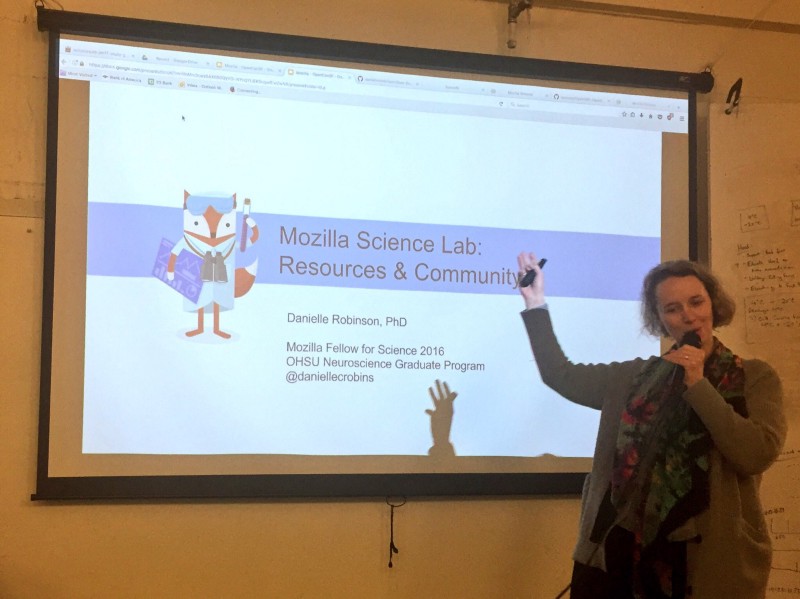 It was so much fun getting to represent the Mozilla Science Lab all four fellows together. We’re usually in different places and we love our biweekly check in calls, but there’s something special about all going out to talk Open Science together!